My association with mental health and illness has been minimal, with a few personal cases spread out across our team. However, through the program at the School of Visual Arts, we began exploring areas less spoken about. Interacting with practitioners and people associated with the difficulty, we found ADHD ‘treatment’ (if you can call it that) to be a complex task. This is because each individual patient requires a unique combination of drugs and therapies, and knowing which approach works best for who requires a lot of patience and effort. Due to this complexity, it has become commonplace for children who are deemed exuberant, disruptive or highly energetic, to be put on medications (such as Ritalin or Adderall). It is believed these medicines would help them focus and make it easier for them to fit in more comfortably to their social and educational environments. And while those approaches can have dramatic positive impacts in a kids’ life, they are not without their side effects and downsides.

Through our interactions, we saw parents struggling with the dilemma of medicating their children.

Our game is designed as a tool to promote and inspire reflection and conversation for such parents. Players play as children who are suspected of having ADHD in an American context. The game covers a child’s journey from elementary school to middle school to high school. Graduation from high school is the end state of this game. This game does not have a win state. The end of the game is a satirical view on medication and the education system. 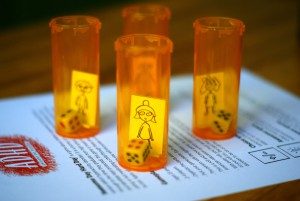 We undertook careful research while designing the game- speaking with people and understanding their personal experiences demanded sensitivity and perceptiveness on our part. All through the game, real stories and experiences of individuals going through or having been through the difficulty are scattered, alongside different outcomes according to whether you were on medication or off it. Our hope is that by playing the game, and being exposed to true stories based on real people, concerned parents will be able to adopt a more nuanced perspective about the positive and negative implications of both medicating and not medicating. It won’t provide any concrete answers and is not, by any means, intended for use as a diagnostic tool. But through the game, we provide a conversation starter around ADHD and prescription medication with interesting insight which would, hopefully, lead to better decisions for both parents and their children.

The making of this game led to many interesting conversation about the education system, expectations that are put on children and common medication really is.

For me, this was really eye-opening, coming from a society where medication for psychological illness is almost taboo.

The end result from this project was unexpected and every time the game was play tested, it led to heated discussions about the rights and wrongs – which was maybe the point.

Tanya Bhandari is a designer who is trying to make and do good. Currently, she is working as a communication designer at the UNICEF Innovation Unit, New York HQ and is also a recent graduate of the MFA Design for Social Innovation program from SVA, NYC.

Noteworthy
byAuthor The Shrinking CouchPosted on June 22, 2016June 22, 2016
Nivendra and Hansini, two psychologists from Sri Lanka, are about to walk across Sri Lanka to increase awareness around mental health and illness. Together,...

Noteworthy
byAuthor Arpita BohraPosted on May 15, 2016June 30, 2016
This is the second part of series of interviews with Dr. Alan Karbelnig, who is a Psychoanalytic psychotherapist based in LA, California. The first...

Noteworthy
byAuthor Nivida ChandraPosted on May 9, 2015May 9, 2015
Look what we found! The very embodiment of The Shrinking Couch! This is a great little pocket sized journal titled aptly – My Dysfunctions:...