“Theatre is the capacity to observe in action and experiment from within yourself and without.”- Augusto Boal

When play, body movement and voice all come together to become therapeutic; clients feel abundant relief and control in their mental health journey. An artform like drama relies on the basis of trust from both parties and a space of open exploration. The client delves into a safe space, takes risks and discovers outcomes. Whilst this may not always be smooth sailing, especially in severe mental illness cases where clinical protocol is followed, drama therapy is an outstanding example of creating change by doing.

A typical session might include in its initial stages, a lot of play with props, using voice and the body to make a client comfortable to express. This is especially relevant with people who have not been in touch with their bodies for a long time, who have not felt the freedom to experience free play since childhood.

Once the warm up for sessions is complete, therapeutic work can begin with improvisation, psycho drama and inner world exploration as well as role play. 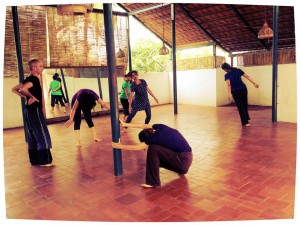 For instance, in working with an adolescent girl who had faced severe trauma as a result of political violence (Naxal-CRPF conflict) and an unstable family environment, I found that drama was an excellent tool to work through her nightmares, traumatic images and even bring closure to grief in close relationships. We first played with a sandbox, clay, craft material and masks to create characters; good and evil, magical and grotesque. She showed me her life and community with stick figures and zoo animals, simultaneously becoming funny and manageable as they diminished in size.

We swam through images of color and paintings to show her happiest and darkest time.

Over time we built a dramatized 3D obstacle course for her to conquer and she was able to represent her storyline and pain but also re-envision her dreams, ambitions as well as create a world of safety and inner integration.  One of her statements before the end of sessions stays with me, “Ab maine apni khuddari jaan li hai” (Now I understand the strength in myself).

As a practitioner, I personally find that drama therapy is very effective because it is amenable to groups too, allowing a space for deep personal transformation within and through a group. For one, it creates a vibrant sense of energy and inter-play between members. As people get more comfortable, they also get more willing to experiment. This can be through donning strange costumes and colors, taking on different postures and rhythms or replicating family relationships in the space.

In one group I took, a 74 year old became his 8 year old school going truant while another member in the group who was a 22 year old ‘cool dude’ (in his own words), his admonishing and over protective grandmother.

Members in the group become supportive elements to one another especially when one person’s story or struggle is brought into focus- sometimes playing different roles of tormentor, the child, parts of oneself and so on. I recall an incident where anger became represented as this gigantic orange ball and people in the group joined in, magnified it and started hurling it at one another (yikes, I thought, time for an emergency shut down?). Yet, beyond the play and trials, there is depth too. The analogy of a fiery ball was slowly peeled away into colored sheets beneath that signified how anger is often a substitute emotion for pain, betrayal and fear.

The magic, to me, takes place when common themes emerge which apply to all humans, families and struggles of the self. Participants slowly let their guard down, playing out fears and traumatic experiences.

It’s also then that I feel simultaneously pulled into this world, cheering along with revelations and sometimes burdened by the weight they carry so a useful reminder to stay grounded in my stance as a facilitator. In my own limited experience, I’ve seen drama-therapy as very effective in diverse groups of children, adolescents, trafficked/abused women, the homeless, families and working professionally.

The beauty of creative arts in therapy is that once experienced, there is freedom and acceptance. Whether in absurdity or the mundane, small aspects are discovered which gives control back into the client’s hands. I have been caught off guard though, whether it is forgetting my session plan or letting my own expressions be shown to the group. They’ve laughed with me as I flounder for an on-the-spot alternative but also help me keep energies up and engaged, even give me feedback about my own change in mood or behavior. One of my clients who had an odd twitch had shared after a session – on repeating persisting body movements – that I too was hunching less, which “looked better”. Oops, who’s supposed to be playing the role of the mirror again?

Maliha Ibrahim has an absolute lust for all that life offers her in the form of therapy, the arts, rock climbing, yoga, travel, food and new people, helplessly hoping that in making a living one doesn’t have to choose only one thing to do every day for the rest of your life.

{Maliha lives in Bangalore. She consults  and takes sessions at Studio for Movement Arts & Therapies (SMArT) and Couch (Unit of Augmenta Health (P) Ltd) . You can email her at [email protected]}

Professionals Speak
byAuthor Rashi KapoorPosted on January 18, 2016January 20, 2016
She sat by the window staring out into the openness, a monotonous gaze. She didn’t say much but continued to stare. She looked around...

Professionals Speak
byAuthor Afshan MariamPosted on February 23, 2015November 2, 2015
In the school where I learn, there is a ten year old boy called Aryan*. He had joined our family, recently. Since it is...

Professionals Speak
byAuthor Sonia Kaur DhinsePosted on December 18, 2015July 15, 2017
Priya* described herself as an anxious person who was always worried about everything. She harmed herself as a way of managing her anxiety. As...